The power of money isn’t an ignorant fact. Therefore, very few of this world’s population has taken a full advantage of it. Revealing the top 10 most expensive and luxurious mobile phones in the world, you’ll come to know how the richest people consume their money for smartphones.

Most of them are made of gold and are covered with diamonds. Also, some of them have precious stones over their casings. All of these factors make them look like not just a gadget but also some sort of art or jewelry. Let’s begin the journey of knowing the very rare and premium smartphones that everyone can’t afford and can only dream of having.

A New list of the 10 Most expensive mobile phones so far: 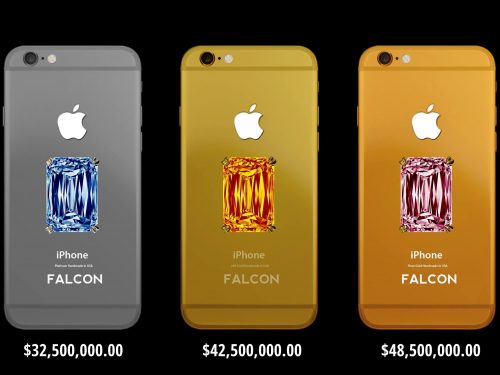 The king of all the luxurious phones is here. Falcon supernova iPhone 6 has a gold casing but the main attraction is a pink diamond on the back. This diamond is the only reason for this huge cost. The less expensive model of this phone is 48.5 million US dollars which has a blue diamond on its back. Each unit of supernova is $110.5 million. There are three alternatives which are distinctive because of 18k gold, Rose Gold, and platinum. Just look at the price and you’ll be now day dreaming after reading its details. 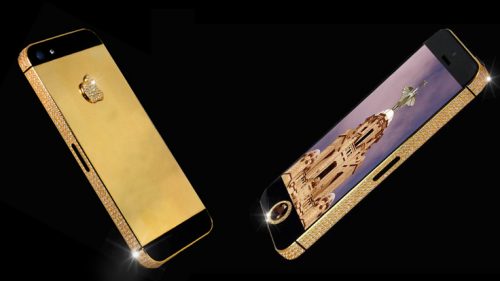 The valuable black diamond is the fact that makes iPhone 5 this much expensive. Previously, Stuart Hughes hasn’t lost a chance to amaze us with the premium smartphones, this time he made something even more overwhelming. The craftsman made this set on the order of a Chinese businessman being the owner of that precious diamond and wanted it on an iPhone 5. The corners have 600 diamonds while the whole frame is made of solid gold. The apple logo has 53 tiny diamonds on it. This is really an outstanding creation. 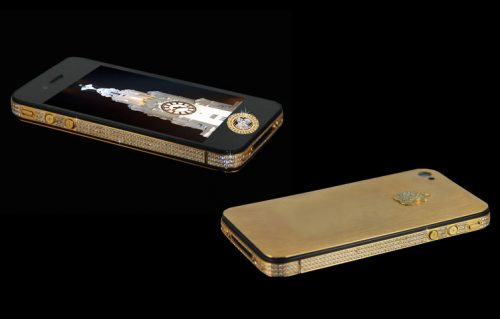 How many of you think of spending $9.4 million for a mobile phone? Obviously, more than 99% of us can’t even think of doing that. But few of this world’s population have the power to spend this amount for iPhone 4S Elite Gold. The back cover and the logo is made of gold and covered with diamonds. Having an 8.6 carat diamond as the home button, the set also contain some precious stones including Charoite, Star sunstone, Pietersite and Rutile Quartz. It is handmade and has been produced 2 times since ever. The platinum body of the phone can be seen with tiny pieces of Dinosaur bones. 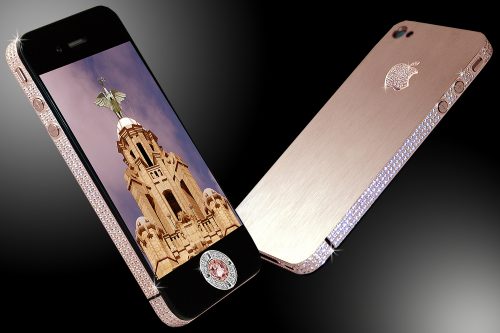 The name of this mobile phone is catchy which makes it even more desirable. But it’s not easy to have one as it costs 8 million US dollars to have this luxurious gadget. Having 500 spotless diamonds encrusted in it, the apple logo is made of rose gold. The navigation key is made of 7.4ct pink diamond. It comes in a 7 kg heavy granite block. It gives a complete feeling of having something grand. Stuart Hughes, by making this marvelous gadget amazed the word. Diamond Rose is the perfect definition of luxurious items. 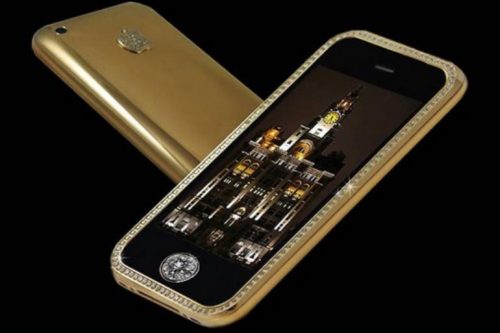 Gold striker iPhone 3GS Supreme is another expensive mobile phone available against the price of $3.2 million. Produced for an Australian businessman initially, each unit is made in 10 months. The packaging consists of a granite box which is 7 kg heavy. Designed by Stuart Hughes, this highly lavish phone is made of diamonds and solid gold. The interesting fact about its covering is that it’s constituted of Nubuck animal skin. This breath-taking gadget is nothing but the most loveable asset of its owner. 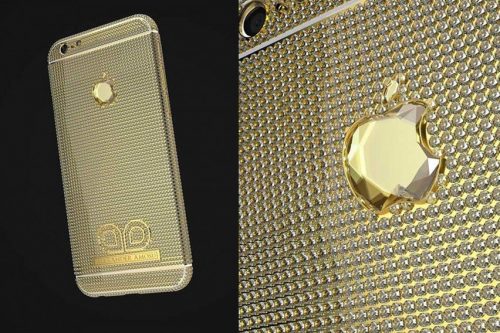 The apple behind the iPhone is enough for most of us to feel the satisfaction of using a high-quality smartphone. But what will happen if we turn the phone, seeing its back side and see a diamond there in apple shape? You’ll freak out. This diamond-studded cell phone has total six diamonds on its body. The production of each unit consumes two months approximately. All the little diamonds are manually placed for the sophisticated design. It’s gold plated body is another attraction for the people around the world. It is the dream of many of us to even hold it our hands.

The renowned Australian jeweler namely Peter Aloisson brought a major revolution in the cell phone introducing by bringing iPhone 3G King’s Button. The premium price is $2,517,345. Apple always brings something out of the box but this set stunned the world as it reflects the features of jewelry, gadget, and art at the same time. The home button is made of a 6.6 carat diamond. The beautiful coating of the phone contains white & rose gold. This luxurious phone is not affordable to numerous people which make it even more previous and most wanted. 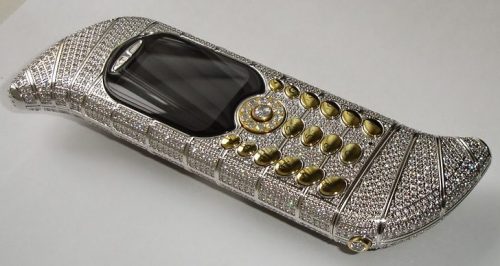 GoldVish released something that added a record in the Guinness Book of World Records of being the world’s most expensive mobile phone the same year it was introduced and sold to a Russian Businessman against 1 million euros. The unique fact is that it is a handcrafted set in which 120 beautiful diamonds are inserted. Obtaining a “Le Million” piece unique is not a piece of cake as the availability is very restricted in terms of production and is only provided for customized requests. Having Sapphire glass display and High capacity Li-Lion 950mAh battery, this cell phone is a pride of its buyer being one of the priciest phones of the world. 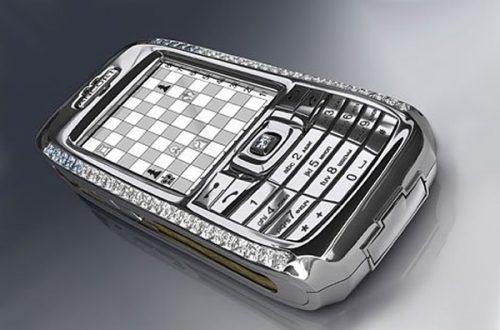 Released on 2006, this mobile phone is the tremendous package of style and technology. Burdened with the most expensive stones and metals, this phone has a platinum casing. Diamonds and carats rose gold have surrounded the navigation key. The corners of the phone are loaded with princes’ diamonds and more diamonds are there on the top. The breath-pausing price is $1.3 million. Can you imagine the price without this precious decoration? Only $600. Not just the diamonds make it worthy but the top-class security of this mobile makes it even more marvelous. 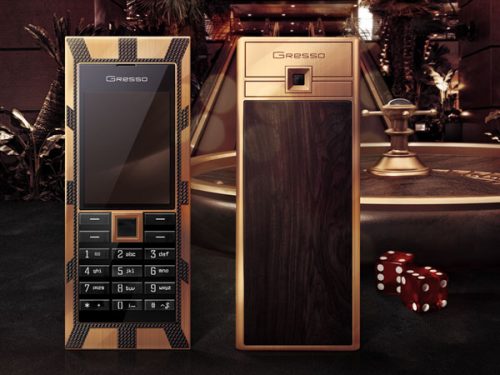 Gresso is pleased to introduce Luxor Las Vegas Jackpot to its customers. This international enterprise that produces premium cell phones and accessories. Established in 1999, this organization usually presents its products in European and American Nations as well as in Russia. This awesome model was introduced in 2011 along with two other mobile handsets Luxor World Time and Luxor. The black diamonds embedded on its front make it luxurious and expensive. Its gold-made frame seems mesmerizing. Its keypad entails 17 sapphires. Also, an alternative to this mobile phone is available in $20,000. 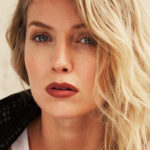 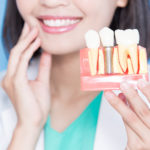