Armed forces are the backbone of a nation’s peace and harmony. There are many, but now you’ll come to know about the top 10 world’s strongest militaries of 2018.

They are of great importance to their nations and therefore a large amount of the budget is allocated for their expenditures. These nations include some European countries like Germany, France along with the USA, UK and some Asian regions like India, South Korea.

They’ve and they’ll enhance their structure and modify their strategies in order to fulfill their missions and reach their goals.

Below mentioned are the top 10 Countries with Powerful Militaries in the year of 2017: 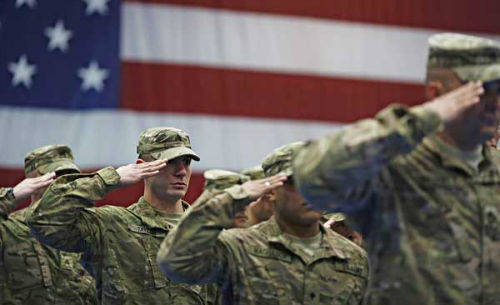 The federal armed forces of the United States are the strongest and most powerful military among all nations of the world. There are five service branches altogether, including Army, Marine Corps, Navy, Air force and Coastguard. The headquarters are located in Virginia, U.S. Currently, the commander-in-chief is Mr. President Donald Trump, while the secretary of defense is James Mattis and Chairman of the joint chief of Staffs. There are three ranks in each branch, i.e. officer, warrant officer and enlisted. There are 1,301,300 active personnel and 811,000 reserve personnel. 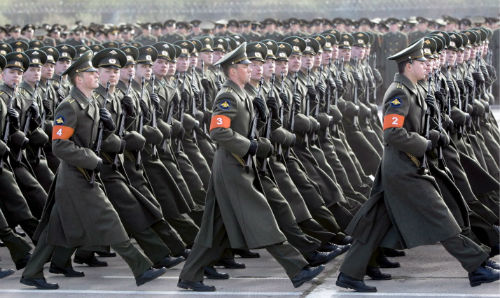 On the 2nd, we have the Russian Federation’s Armed forces that are distributed into three divisions of armed services, two distinct troop branches and the rear of the armed forces. There are 1 million active personnel and 2 million reserve personnel by the year 2017. 5.4% of the GDP is spent on the forces. The Supreme Commander-in-chief is the President Mr. Vladimir Putin, Minister of Defense is Sergey Shoigu and Chief of the General Staff is Valery Gerasimov. By 2016, the budget allocated was 65.6 billion US Dollars. They have the advanced nuclear weapons as well. 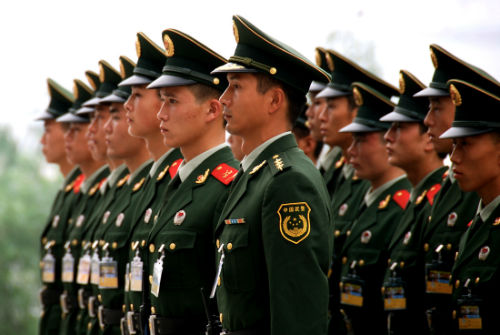 The military forces of China are known as People’s liberation Army (PLA) which contains five professional service branches the Ground Force, Air Force, the Strategic Support Force, Rocket Force and Navy. Their motto is to ‘Serve the People!’ It was founded on 1st August 1972 and the headquarters is situated in Beijing, China. It is the world’s largest army having 2,300,000 active personnel and 510,000 reserve personnel. 1.9% of the total GDP is spent which is 147 billion US Dollars. The mission statement is well defined and meant for the welfare of humankind. According to a fresh report from the International Institute for Strategic Studies, China’s armed forces are fast approaching “near parity” with western nations. 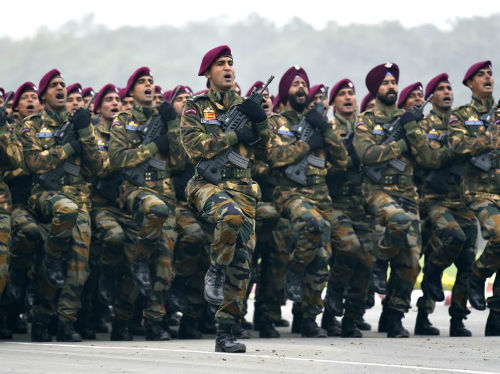 The military forces of India contain three branches that are army, navy and air force. The headquarters are located in Delhi. There are 1,408,551 active personnel and 1,155,000 reserve personnel. 2.1% of the total GDP is the expenditure of the forces which is $53.1 billion. India has trained many armed forces of the world like Vietnam and Singapore and now they’re set to teach the Indonesian forces. They have certain ships and submarines for their navy. Paramilitary forces are also there consisting of Indian Coast Guard, Assam Rifles, and Special Frontier Force. 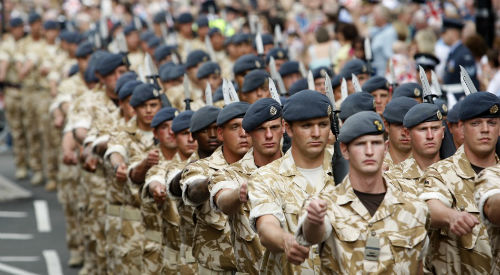 The military services of the Great Britain consist of Naval Service, Army, and Air Force and the navy is further divided into the royal navy and royal marines. The head office is located in London. The hierarchy of the forces is very well maintained. There are 153, 770 active personnel and 81,850 reserve personnel. 2% of the total GDP is consumed which is an amount of £46 billion. Among the five recognized nuclear powers, the United Kingdom is one of them, which shows it is one of the toughest and strongest and largest militarizes of the world. 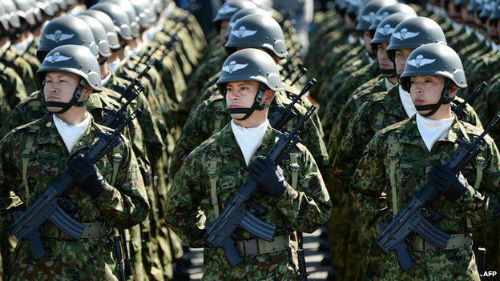 The military of Japan is called Japan Self-Defense Forces, of which there are separate forces for Ground, Maritime, and Air. 247,150 active personnel are there while 56,100 are the reserve personnel. $41 billion is the budget allocated, which is 1% of the GDP. Many nations are the foreign suppliers for Japanese Military including UK, Switzerland, France, Germany, US, Italy, Sweden  & Russia. There are also females in the military aged between 16 to 49. The soldiers are well trained and expert in their practices. The Japanese military is the pride of the country. 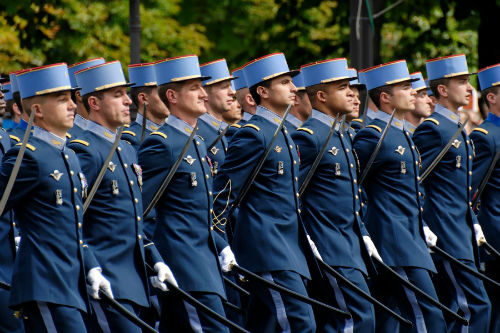 Apart from Navy, Air Force and Army, French Armed Forces also include National Gendarmerie and National Guard. In Paris, the head office is located. 1.5% of the GDP was allocated in 2014 and €32.0 billion by the year 2016. 208,916 active personnel are there while 27,785 reserve personnel are there. It was founded in 1972 and since then it has been growing with more strength and power. They also possess biological and chemical weapons which make them even more superior. They have HK416 as their service rifle. Previously they had FAMAS. 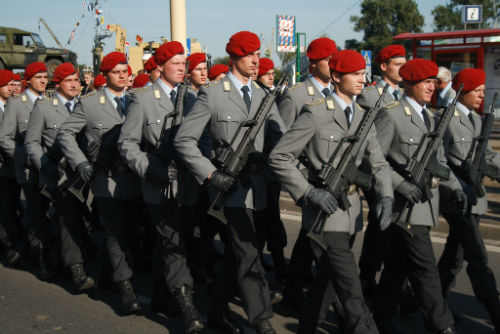 Germany army has been active since 1955 and they’re now about to increase army to 198,000 by 2024 by increasing 5,000 soldiers into the forces. Also, they’re also adding 1,000 civilians’ posts and approximately 500 reserves. They have handguns, Submachine guns, Carbines, Rifles, Machine guns, Sniper Rifles, Shotguns, Grenades, Anti-tank weapons and other vehicles including armored vehicles, engineering vehicles and many more. Their aircrafts are usually made by themselves, except for two made by France and USA.  The modern equipment includes NH-90 transport helicopter, PzH2000 self-propelled artillery, and Leopard 2A6 main battle tank. 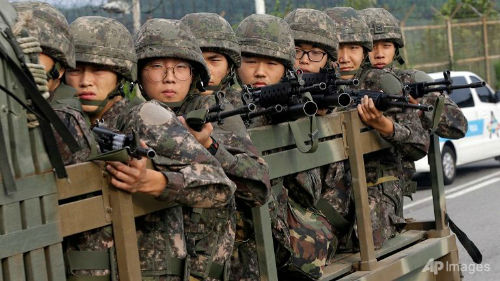 The Republic of Korea Armed Forces’ headquarter is located in Seoul. There are 625,000 active personnel while 3,100,000 reserve personnel. South Korea is the 1st among the countries with the highest military expenditures having $30 billion USD as the total budget. They acquire Rifles, Pistols, Tanks, Armored Vehicles and other modern types of equipment are being utilized by the military services. On 15th August 1958, it was founded. Military age is voluntary from 18, for males the compulsory age is 20 to 38 years. The soldiers are passionate and enthusiastic, especially the level of patriotism is very high. 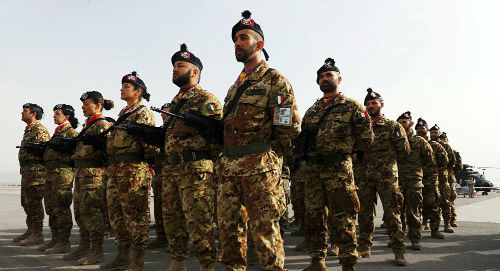 On 4th May 1861, the Italian Armed Forces came into being. There are four branches, including Esercito Italiano, Aeronautica Militare, Marina Militare and Carabinieri. They’re presently partaking in 26 missions, including those of the United Nations, NATO, European Union and Multilateral Missions. The equipment used are made in Italy itself and also UK, Belgium, US, Finland and other countries. Combat knives, hand grenades, riverine boats, mortars and other modern tools and weapons are under their use. Their army is their strength, their power, and their pride and they’ve more plans to make it even more powerful. 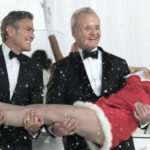